In the last lesson we discussed protein 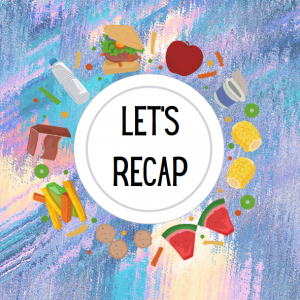 and recommendations regarding quantity, quality, and other relevant aspects for overall health and dieting.

In this lesson we will do the same with dietary fat. Unlike with protein, there are no specific reasons why fat intake will be additionally beneficial for weight loss. However, fat intake is still important for general health purposes.(Liu, 2017)

While protein discussed above has literature suggesting certain amounts per kilogram of body weight, there is no strong evidence base supporting fat be considered in the same manner.

The only two essential fatty acids are linoleic acid and linolenic acid, and one of the reasons for the lower range of calories listed above is to ensure that the recommended intakes for these are met:

Tip: As mentioned previously, you can plug a single day of eating into cronometer.com to see if you are meeting these essential fatty acid recommendations. However, as indicated in the prior note you can likely consume considerably less than the recommended intakes without significant risk of harm. Thus, I would not burden yourself too significantly to meet the recommended fat intake levels if it would otherwise prove troublesome to do so, especially when actively losing weight and thus consuming relatively few calories.

There are a handful of other reasons to consume dietary fat: 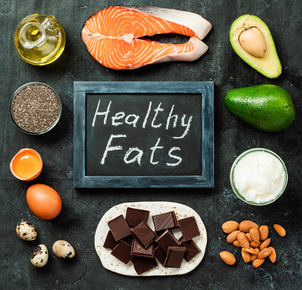 Example: If a person wants to consume 2,000 kcal/day, 20% of this would be 400 kcal. Considering 9 kcal/gram of fat, this would equate to a minimum of 44 grams of fat daily, with ~1-2 grams being linolenic acid. 10+ grams of linoleic acid daily would likely be sufficient to meet health requirements in adults.

There is nothing inherently wrong with a high fat diet that goes beyond the upper limits of the ranges listed above; the upper limits were set with the thought that going higher will make it harder to get the other essential/healthy nutrients needed from sources of protein and carbohydrates (ie, several servings of fruits and vegetables) while still limiting total calories to an appropriate amount for body weight management. Thus, if total nutritional needs are being met and total caloric goal allows it, increasing fat intake above the previously mentioned upper limits is safe, though limits regarding saturated and trans fatty acids should be kept in mind (see below). 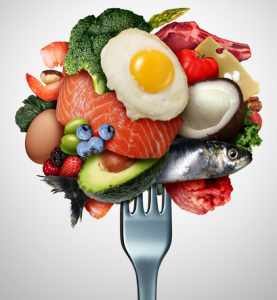 diets are an example of a dietary strategy with fat intake considerably above the upper limit listed above. There are pros and cons of ketogenic diets; for example one pro is appetite suppression while one con is difficulty building skeletal muscle.(Gibson, 2015; Vargas, 2018) I will discuss ketogenic diets in more detail in Lesson 12. 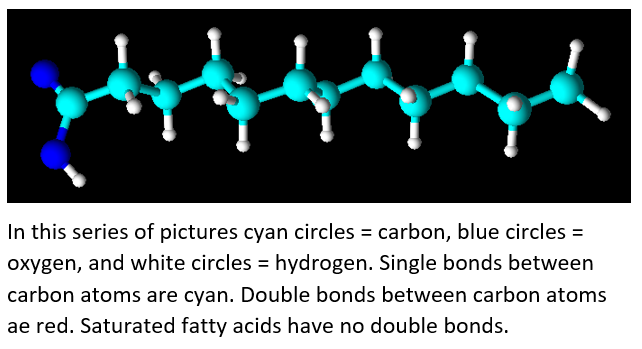 As the saturated fat molecule is relatively linear, it is easy for them to stack on top of each other and thus they tend to be solids at room temperature.

There are no specific recommendations for monounsaturated fat intake and the evidence overall is mixed regarding a benefit to purposely including more of this in the diet in lieu of other nutrients.(Fattore, 2018) Part of this confusion may stem from the source of the monounsaturated fatty acids as a recent study indicated a beneficial health impact when this is predominantly consumed from plant sources as opposed to animal sources.(Guasch-Ferré, 2019; Ros, 2019) Thus, it is possible monounsaturated fatty acids do not have significant health implications themselves but rather reflect the overall food matrix (see note below) within which they are present. 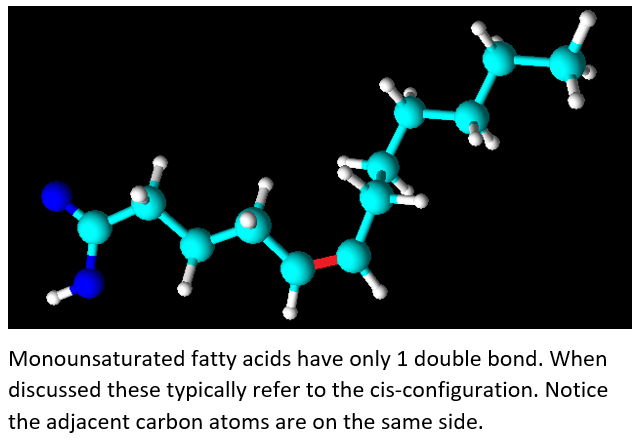 With both of the adjacent carbons of the double bond on the same side, this molecule is much less linear than saturated fat. These molecules thus stack together less well and will tend to form a liquid at room temperature.

Note: The term “food matrix” alludes to the full food source of the nutrients in question. Many studies are done on isolated nutrients but generally we do not consume nutrients in isolation. When we consume whole foods the health impact is not necessarily just the sum of the individual parts. This is due to potentially competing effects of nutrients within a food that can alter absorption but also to the many micronutrients and phytonutrients contained within a full food source that are generally not considered in studies of individual nutrients. This can lead to the differences seen in the plant vs animal sources of monounsaturated fatty acids and potentially the differences in saturated fatty acids from dairy vs nondairy sources (though the chemical structure of the saturated fatty acids may play a role here as well).

These are generally considered to have either positive or neutral effects on overall health. There is a body of evidence suggesting replacing saturated fatty acids with polyunsaturated fatty acids leads to better cardiovascular and overall health outcomes.(Siri-Tarino, 2015) However, not all research supports this, and controversy persists.(Fattore, 2018, Forouhi, 2018) Prior concerns of unhealthy ratios of omega 6 to omega 3 seem generally unfounded and may moreso reflect inadequate omega 3 intake rather than excessive omega 6 intake.(Maki, 2018; Marventano, 2015) The two essential fatty acids mentioned above, linoleic & linolenic acid, are both polyunsaturated. Overall there generally seems to be a potential benefit of increased polyunsaturated fatty acid intake without significant risk of harm. 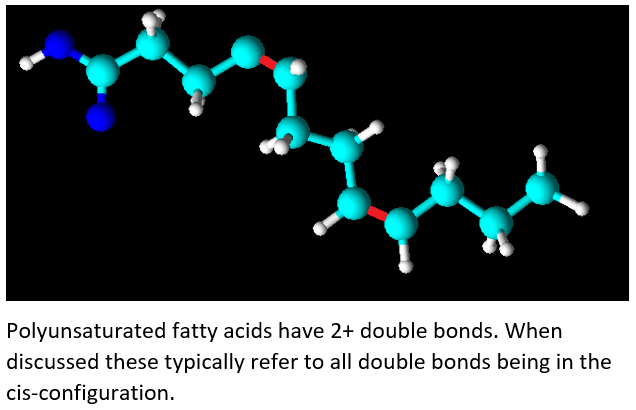 Similar to saturated fatty acids, trans fatty acids have a mostly linear conformation, making them stack together more easily and more likely to be a solid fat at room temperature.

Dietary fat is important for a number of reasons, and the full range of positive and negative health impacts of the various types are not completely clear:

Similar to the last lesson where studies on isolated protein sources were not necessarily applicable to people eating food items and mixed meals, studies on isolated fatty acids are not necessarily applicable to whole food consumption. It is apparent with the significant controversy alluded to above that the sources of the fats play a large role in the overall health impact. For this reason much of the literature is starting to shift towards consideration of overall dietary patterns and food sources as opposed to just individual nutrients. Food groups are discussed in Lesson 10 and various diets are discussed in Lesson 12.