The above listed systems all play a role in movement. The central and peripheral nervous systems connect our brain to our muscles. Our musculoskeletal system translates thoughts into actual movement. The cardiovascular and respiratory systems provide the nutrients our muscles need to undergo contractions.

Note: Unless otherwise stated I took all of the following images from Wikipedia. 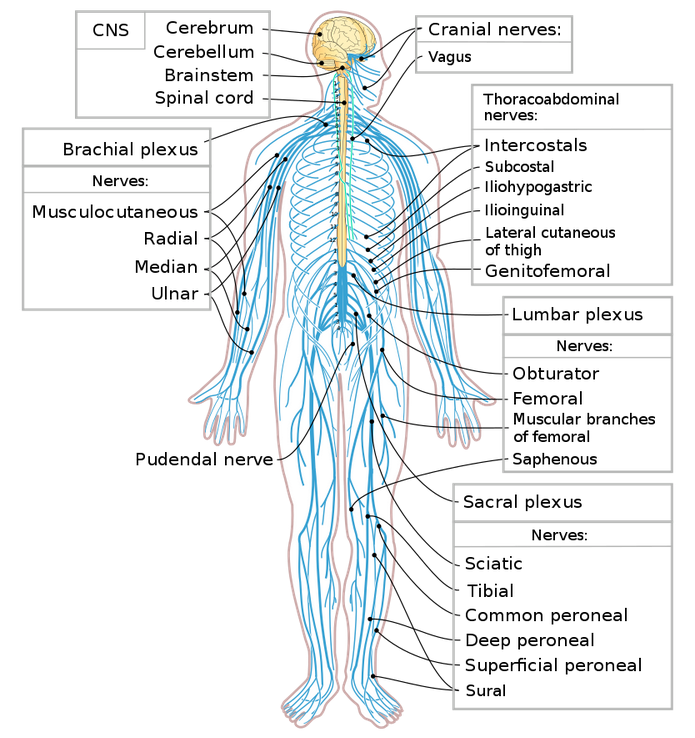 Skeletal muscle generally has an outer layer of connective tissue called epimysium. A middle layer of connective tissue called perimysium surrounds distinct muscle fascicles within this epimysium. Lastly, an inner layer of endomysium surrounds individual muscle fibers within fascicles. The image below shows all of the basic structures of skeletal muscle. I will discuss the bottom part of the image further below. 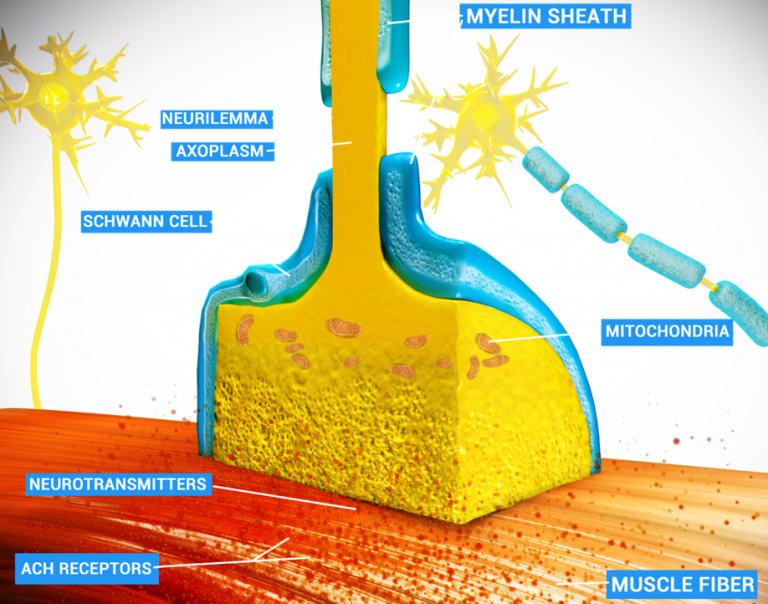 The schematic below shows a zoomed in cartoon of this. When the released acetylcholine binds to the receptors, this causes sodium ions to enter the cell. 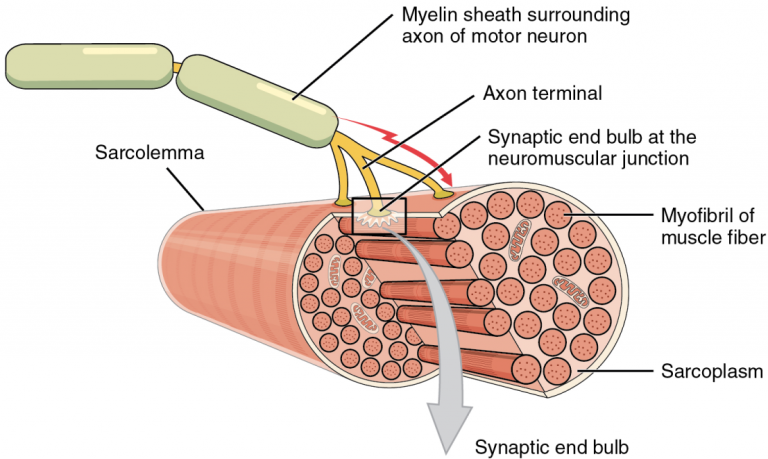 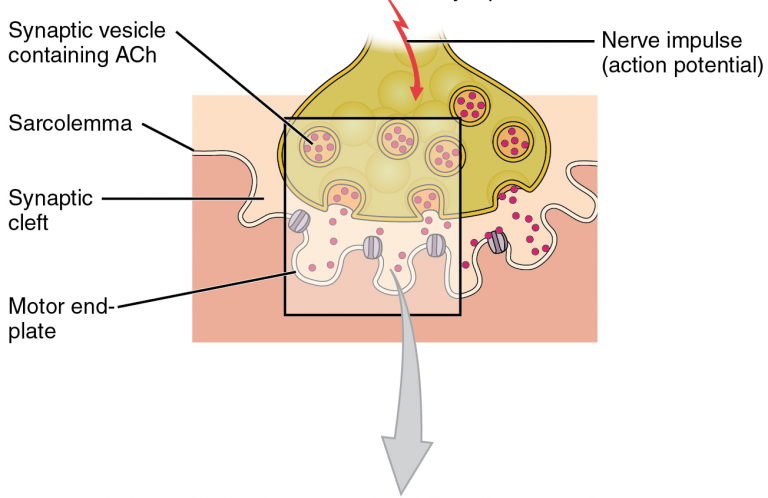 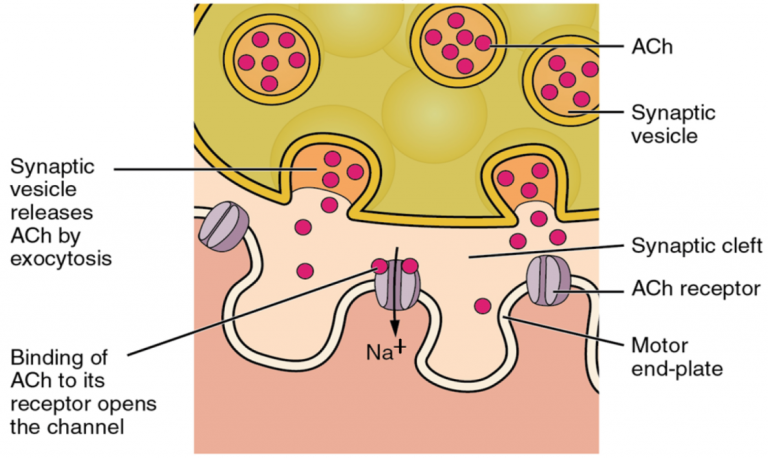 When the sodium ions enter the skeletal muscle fiber this generates an action potential; this is a rapid rise and then fall in voltage across the sarcolemma (muscle fiber membrane) due to the positive charge of the sodium. This action potential transcends through transverse tubules (“t tubules”), ultimately leading to calcium entering the core of the muscle fiber. The following cartoon shows a muscle fiber, its component myofibrils, the location of the sarcoplasmic reticulum (a storage network for calcium) and t-tubules. It also shows the presence of many mitochondria (organelles that generate the adenosine triphosphate (ATP) needed to fuel muscle contractions). MItochondria are discussed further in Lesson 2. 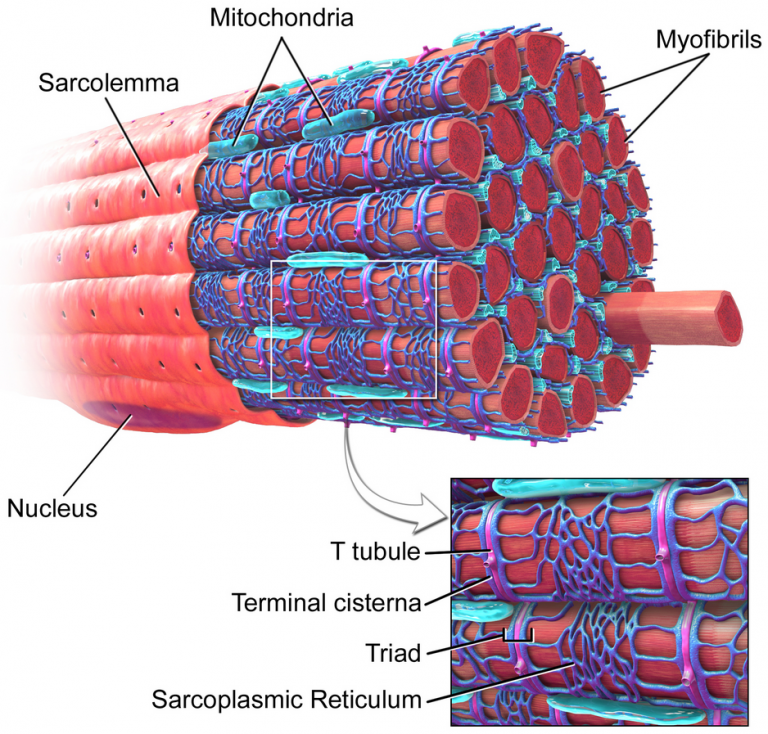 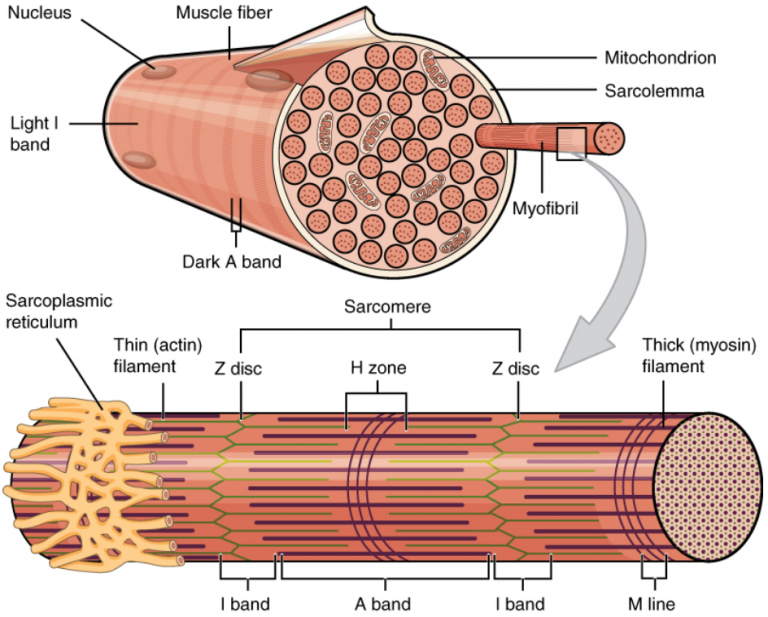 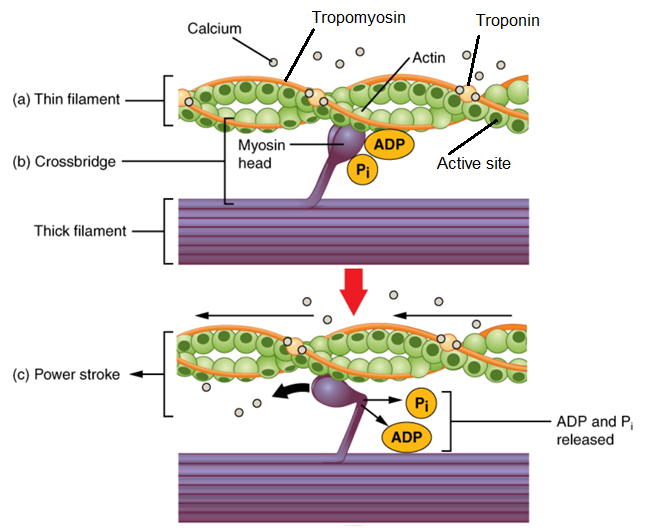 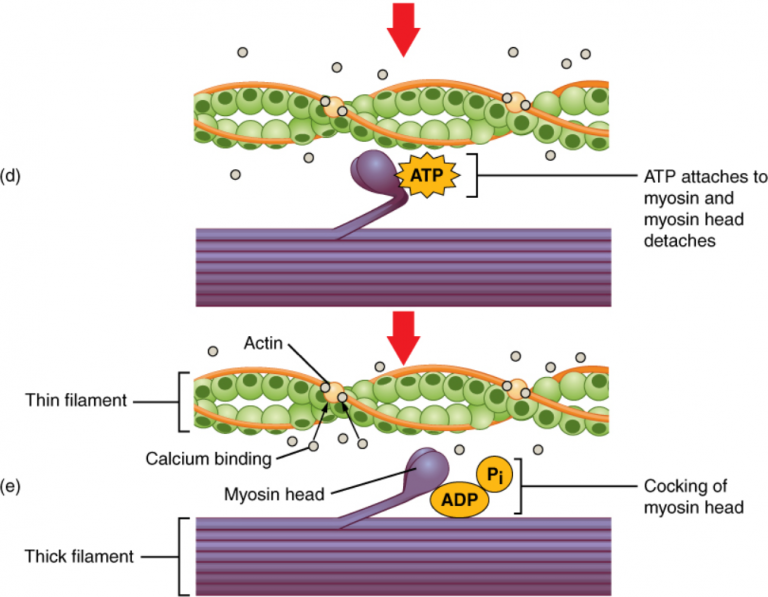 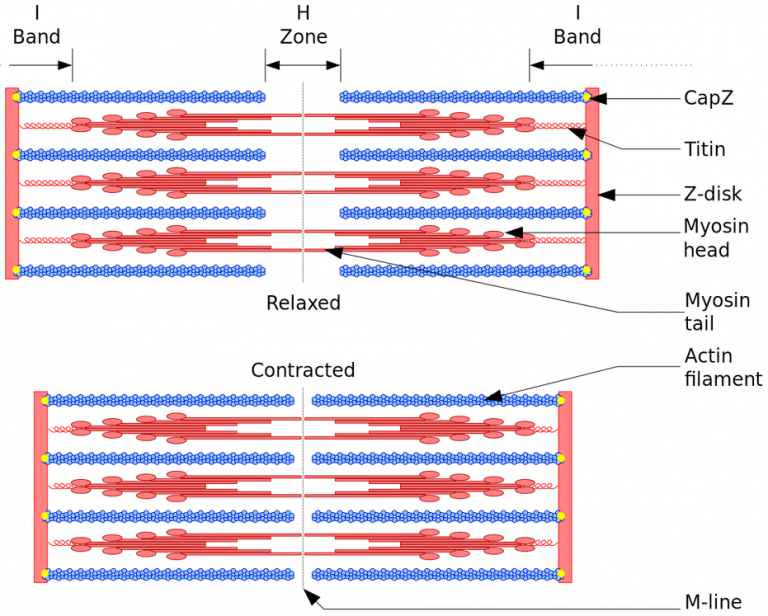 So how does this generate movement? The epimysium, perimysium, and endomysium of skeletal muscle fuse together into a tendon that attaches to a bone. When the muscle contracts and shortens, it pulls on the attached tendon(s) which pull on the bones, causing movement.

Note: A key aspect of movement is that when skeletal muscles contract, they always shorten. Keeping this in mind helps to make it much easier to visualize and understand which muscles perform different actions in the body. We’ll discuss movements and exercises of the major muscle groups in Lessons 9-12.

Looking at the last two figures:

When sarcomeres are “too relaxed” or “too contracted” only a subset of possible cross bridges can form; this leads to submaximal force production. This phenomenon is termed the “length-tension relationship” and it is depicted in the figure I created below.

When we want to initiate movement we generally do not use every motor unit available. Rather, according to “Henneman’s size principle”, the smaller motor units activate first and the larger motor units only activate if needed.(Kraemer, 2012) Additionally, motor units can alter the frequency of action potentials (called “rate coding”). When we need to generate more force, two primary events occur:

As a result of these two factors, plus the fact that cross bridge formation is not instantaneous, it takes some amount of time to generate maximum force. Therefore, maximum force cannot be generated at a maximum velocity of contraction, as the latter would occur too quickly. This is depicted in the figure I created below.

The terms “oxidative” and “glycolytic” are discussed in the next lesson. Being more oxidative, type I muscle fibers are better able to use aerobic pathways for energy production. Therefore, this is helpful for sustaining muscular activity over longer time periods (ie, cardiovascular activity). As type IIx fibers more prominently use anaerobic & glycolytic pathways, they are better for shorter bursts of activity (ie, sprinting or lifting weights explosively). Type IIA is in between these but are functionally more like type IIX. These energy production pathways are discussed in the next lesson.

Note: Some fibers can have properties of multiple types as well as shift along a spectrum to some degree between them.(Kraemer, 2012) Over time as one exercises fibers will shift properties to a limited degree to better meet the demands of the training stimulus.

Example: Conceptually, motor unit recruitment order makes sense when considering walking vs jogging vs sprinting. When walking we are going to predominantly use the smaller motor units with primarily type I muscle fibers; this is because we do not need to generate large amounts of force to walk but our body can sustain walking for extended periods of time. As we move on the spectrum towards jogging and then sprinting, we will need to impart more force into to the ground to propel us forward at faster speeds; this will utilize more of our larger motor units with predominantly type II muscle fibers. This allows us to generate more force and move faster but only for a short period of time prior to fatiguing and needing to slow down.

For some muscles the fascicles actually join the tendon at an angle relative to the primary direction of contraction of the muscle. This angle, called the “pennation angle”, allows a greater number of fibers to be packed in parallel, and with more fibers a greater amount of force can be generated.

The cartoon below illustrates how the pennation angle allows more fibers to be present. The the black lines represent tendons, the red lines represent fascicles, the blue line represents the anatomic cross sectional area (aCSA), and the green line represents the physiologic cross sectional area (pCSA). Image A is a fusiform arrangement, B is unipennate, C is bipennate, D is multipennate. In A the pennation angle (the angle between the blue and the green line) is 0.

The aCSA is essentially equivalent to the width of the muscle, but when fascicles run through the muscle at an angle the aCSA does not fully approximate the amount of fibers that are present. The pCSA essentially represents the area perpendicular to the fascicles themselves and not just the area of the muscle as a whole; this is a better approximation of the total number of fibers and force production capability. As the pennation angle increases, the pCSA increases, and the amount of force that can be generated increases.

Note: Technically when calculating the amount of force that can be produced one must multiply the pCSA by the cosine of the pennation angle; this still overall favors greater force production with a larger pennation angle given the increase in pCSA that is observed. For greater discussion of the relationship between muscle size, structure, and strength, see (Vigotsky, 2018).

In order to move several steps must occur. First, we generate signals in our brain that travel through our central nervous system to our peripheral nervous system. Then, motor neurons of the peripheral nervous system transfer these signals to several muscle fibers by releasing small neurotransmitters. Subsequently, these neurotransmitters lead to sodium ions entering the muscle fiber; this generates an electrical signal that results in calcium binding to the core components of muscle fibers. This triggers the core components to interact using ATP to generate a muscle contraction. Ultimately, this process leads to muscles shortening and pulling on their tendons. Since these tendons pull on bones, this generates movement.

Our muscles are more effective at generating large amounts of force at certain lengths; when they are stretched too long or placed in a shortened position they may be unable to generate maximum force. Additionally, if we need to generate more force to carry out a specific movement our body increases motor unit recruitment (initially smaller motor units are utilized and larger ones are recruited as needed) and rate coding (the frequency at which each motor unit generates a contraction). Another contributing factor to greater force production is a slower velocity of contraction, though if the contraction is too slow this will hinder power output. Lastly, the pennation angle, one description of the architecture of muscle, can influence force production, as can properties of the muscle fibers themselves (ie, type IA vs type IIA vs type IIX).

This has not been an exhaustive discussion of factors contributing to movement. However, the above should be plenty for an introduction to how muscles work and sets the stage to see what physiologic changes occur with exercise as described below. 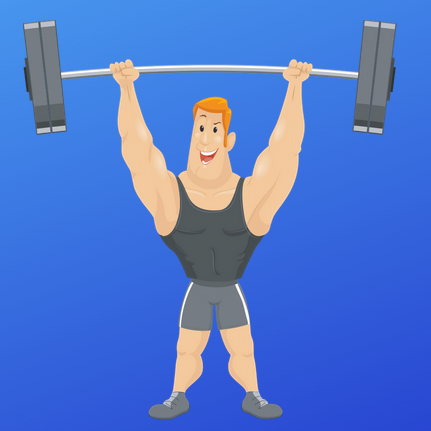 Over longer periods of time strength training contributes to increased cross-sectional area of skeletal muscle via skeletal muscle hypertrophy. This is currently thought to occur primarily via the addition of sarcomeres (the individual contractile units within myofibrils) as well as the addition of myofibrils to muscle fibers.(Haun, 2019) However, there are many gaps in our current understanding.(Jorgenson, 2020) Furthermore, the exact triggers for this are unclear(Schiaffino, 2020), but various considerations include tension placed on the muscle while training, metabolic stress generated by the buildup of metabolites, and exercise-induced muscle damage.(Wackerhage, 2019) In addition to this, the muscle fiber types will transition to a degree to better suit the training stimulus.(Reggiani, 2020) Additional muscle properties can change, such as the pennation angle of the muscle fascicles as well as the length of the fascicles when sarcomeres are added in series.(Maestroni, 2020)

Note: When skeletal muscle hypertrophy occurs with strength training this is not necessarily a uniform process throughout the entire muscle.(Vigotsky, 2018) Different portions of a muscle can grow at different rates. Additionally when new sarcomeres or myofibrils are added this may occur in parallel or in series. I drew a simple diagram to illustrate this below.

We actually do not have a great understanding of how skeletal muscle hypertrophy occurs. For a greater discussion of this topic, please read (Jorgenson, 2020).

Overall, the nervous and musculoskeletal systems are intricately connected to allow us to generate movement, and when we exercise regularly several physiologic adaptations occur. When attempting to design an exercise program we can consider these factors and train them to varying degrees depending on one’s goals. These goals may be sport-specific for athletes, while many of these considerations also allow exercise to contribute to overall health. These topics will be discussed further in upcoming lessons. We also saw in this lesson the importance of mitochondria to help supply ATP to fuel skeletal muscle contractions. In the next lesson we’ll discuss energy production in more detail, as well as the physiologic adaptations that occur with aerobic training.